Local time in Colombo is 3:19 am Wednesday. 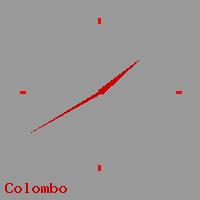 Sri Lanka Telecom PLC (SLT) is the premier telecommunications services provider in Sri Lanka and one of the country's most valuable blue chip companies with an annual turnover in excess of Rs 40 billion. The Company provides a huge range of domestic and international services which includes fixed & wireless voice, internet and data services that cater to a wide audience comprising of both corporates and domestic customers.

Sri Lanka Telecom has a long history of over 150 years, having started its operations in 1858 with the establishment of the first Telegraphic Circuit between Galle and Colombo. In the same year it established its first international Telegraph Communication between then called Ceylon, and India. Since then, Sri Lanka Telecom has passed several milestones, some of which include: in 1991 Sri Lanka Telecom became a Corporation and in 1997 the Company was privatised with the collaboration of Nippon Telegraph and Telephone Corporation (NTT)and listed in the Colombo Stock Exchange's Milanka Price Index. In 2008, NTT sold its stake in SLT to Global Telecommunications Holdings N.V of Netherlands, which currently owns 44.9% stake in Sri Lanka Telecom (SLT) whilst 49.5% is owned by the Government of Sri Lanka and the balance shares remain with the general public.