Local time in Manila is 5:25 am Thursday. 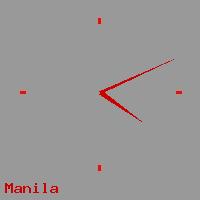 Philippines is one of the great telecom success stories in recent years, fueled by tremendous growth in mobile and text messaging services. The number of mobile subscribers has leapt five-fold since 2000 to 32.5 million, topping 41 percent penetration.

This remarkable growth is due both to innovative pre-paid pricing packages, and to the unparalleled adoption of short message service (SMS) text messaging as an alternative to traditional voice calls. Philippines mobile services providers Smart, the PLDT subsidiary, and Globe Telecom were among the first in the world to utilize mobile pre-paid calling plans. The result is wide household penetration of basic access services throughout even low income areas. As important, SMS has caught on with a fervor that is unrivaled anywhere in the world. Domestic text traffic is thought to outweigh that of voice by a factor of 10 to 1. Non-voice services account for approximately 40 percent of mobile carrier revenues.

The rapid rise in mobile communications has come at the expense of the fixed line network. Fixed line penetration is about 4 lines per hundred and the installed base is steadily eroding.