Local time in Calcutta is 1:16 am Thursday. 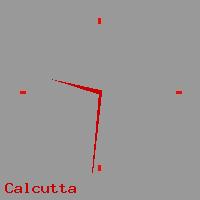 Because our calls rates has no hidden charges like connection fees or expensive access numbers, ClicknCall is cheaper than calling cards to India that may advertise a lower rate. We also use premium connection so you can make crystal clear cheap calls to India.
You can also send cheap SMS to India delivered instantly.

How to call India

In 1880, two telephone companies namely The Oriental Telephone Company Ltd. and The Anglo-Indian Telephone Company Ltd. approached the Government of India to establish telephone exchanges in India. The permission was refused on the grounds that the establishment of telephones was a Government monopoly and that the Government itself would undertake the work. In 1881, the Government later reversed its earlier decision and a licence was granted to the Oriental Telephone Company Limited of England for opening telephone exchanges at Kolkata, Mumbai, Chennai (Madras) and Ahmedabad and the first formal telephone service was established in the country.28 January 1882, is a Red Letter Day in the history of telephone in India. On this day Major E. Baring, Member of the Governor General of India's Council declared open the Telephone Exchange in Kolkata, Chennai and Mumbai. The exchange at Kolkata named "Central Exchange" was opened at third floor of the building at 7, Council House Street. The Central Telephone Exchange had 93 number of subscribers. Bombay also witnessed the opening of Telephone Exchange in 1882.

In 1975, the Department of Telecom (DoT) was separated from P&T. DoT was responsible for telecom services in entire country until 1985 when Mahanagar Telephone Nigam Limited (MTNL) was carved out of DoT to run the telecom services of Delhi and Mumbai. In 1990s the telecom sector was opened up by the Government for private investment as a part of Liberalisation-Privatization-Globalization policy. Therefore, it became necessary to separate the Government's policy wing from its operations wing. The Government of India corporatised the operations wing of DoT on 1 October 2000 and named it as Bharat Sanchar Nigam Limited (BSNL). Many private operators, such as Reliance Communications, Tata Indicom, Vodafone, Loop Mobile, Airtel, Idea etc., successfully entered the high potential Indian telecom market.

After 1995 the government set up TRAI (Telecom Regulatory Authority of India) which reduced the interference of Government in deciding tariffs and policy making. The DoT opposed this. The political powers changed in 1999 and the new government under the leadership of Atal Bihari Vajpayee was more pro-reforms and introduced better liberalization policies. They split DoT in two- one policy maker and the other service provider (DTS) which was later renamed as BSNL. The proposal of raising the stake of foreign investors from 49% to 74% was rejected by the opposite political party and leftist thinkers. Domestic business groups wanted the government to privatize VSNL. Finally in April 2002, the government decided to cut its stake of 53% to 26% in VSNL and to throw it open for sale to private enterprises. TATA finally took 25% stake in VSNL.

This was a gateway to many foreign investors to get entry into the Indian Telecom Markets. After March 2000, the government became more liberal in making policies and issuing licenses to private operators. The government further reduced license fees for cellular service providers and increased the allowable stake to 74% for foreign companies. Because of all these factors, the service fees finally reduced and the call costs were cut greatly enabling every common middle class family in India to afford a cell phone. Nearly 32 million handsets were sold in India. The data reveals the real potential for growth of the Indian mobile market. In March 2008 the total GSM and CDMA mobile subscriber base in the country was 375 million, which represented a nearly 50% growth when compared with previous year. As the unbranded Chinese cell phones which do not have International Mobile Equipment Identity (IMEI) numbers pose a serious security risk to the country, Mobile network operators therefore planned to suspend the usage of around 30 million mobile phones (about 8 % of all mobiles in the country) by 30 April. 5-6 years the average monthly subscribers additions were around 0.05 to 0.1 million only and the total mobile subscribers base in December 2002 stood at 10.5 millions. However, after a number of proactive initiatives were taken by regulators and licensors, the total number of mobile subscribers has increased greatly to 617 million subscribers as of May 2010.

India has opted for the use of both the GSM (global system for mobile communications) and CDMA (code-division multiple access) technologies in the mobile sector. In addition to landline and mobile phones, some of the companies also provide the WLL service. The mobile tariffs in India have also become lowest in the world. A new mobile connection can be activated with a monthly commitment of US$0.15 only. In 2005 alone additions increased to around 2 million per month in the year 2003-04 and 2004-05.

In June 2009, the Government of India banned the import of several mobile phones manufactured in China citing concerns over quality and the lack of IMEI's which make it difficult for authorities in India to track the sale and use of such phones. In April 2010, the Government was also reported to be blocking Indian service providers from purchasing Chinese mobile technology citing concerns that Chinese hackers could compromise the Indian telecommunications network during times of national emergency. A series of attacks on Indian government websites and computer networks by suspected Chinese hackers has also made Indian regulators suspicious with regards to the import of potentially sensitive equipment from China. The companies reported to be affected by this are Huawei Technologies and ZTE.

With a subscriber base of more than 650 million,the Mobile telecommunications system in India is the second largest in the world and it was thrown open to private players in the 1990s. The country is divided into multiple zones, called circles (roughly along state boundaries). Government and several private players run local and long distance telephone services. Competition has caused prices to drop and calls across India are one of the cheapest in the world. The rates are supposed to go down further with new measures to be taken by the Information Ministry.In September 2004, the number of mobile phone connections crossed the number of fixed-line connections and presently dwarfs the wireline segment by a ratio of around 20:1. The mobile subscriber base has grown by a factor of over a hundred and thirty, from 5 million subscribers in 2001 to over 650 million subscribers as of July 2010 (a period of less than 9 years) . India primarily follows the GSM mobile system, in the 900 MHz band. Recent operators also operate in the 1800 MHz band. The dominant players are Airtel, Reliance Infocomm, Vodafone, Idea cellular and BSNL/MTNL. There are many smaller players, with operations in only a few states. International roaming agreements exist between most operators and many foreign carriers. India is divided into 23 telecom circles.