Local time in Dhaka is 1:31 am Thursday. 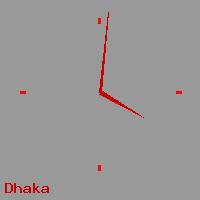 Citycell (Pacific Bangladesh Telecom Limited) is the first mobile communications company of Bangladesh. It is the only CDMA network operator in the country. As of 1 March, 2008, Citycell's total mobile subscriber base is 1.56 million, up 137 per cent or 680,000 from two years ago, giving it the best growth rate of the company till date. Citycell is currently owned by Singtel with 45% stake and the rest 55% owned by Pacific Group and Far East Telecom.

By the end of 2007 Citycell had refurbished its old brand identity and introduced a new logo and corporate identity; the new logo is very reminiscent of the old logo. However the slogan has remained unchanged "because we care"