Local time in Canberra is 8:32 am Wednesday. 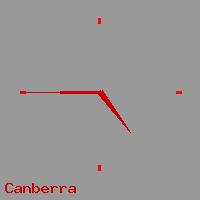 Australia has one of the most competitive and regulated telecommunications markets in the world. With the roll-out of national broadband network (NBN) in Australia, the traditional copper line home phones are largely replaced by Voice over Internet Protocol (VoIP) services. Most people aren't even aware that their phone service are carried over the Internet.