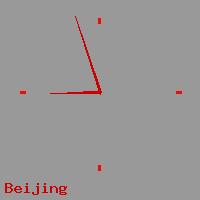 Calling China - how to dial?


Some of the area codes for calling China

Telecommunications in China
When the People's Republic was founded in 1949, the telecommunications systems and facilities in China were outdated and rudimentary, and many had been damaged or destroyed during the war years. Those that did exist were largely limited to the eastern coastal cities, the Nanjing-Shanghai region, and a few interior cities. In the 1950s existing facilities were repaired, and, with Soviet assistance, considerable progress was made toward establishing a long-distance telephone wire network connecting Beijing to provincial-level capitals.

Communications in China were established rapidly in the early 1950s. By 1952 the principal telecommunications network centered on Beijing, and links to all large cities had finally been established. Work quickly got under way to repair, renovate and expand the system, and from 1956 telecommunications routes were extended more rapidly. To increase the efficiency of the communications system, the same lines were used for both telegraphic and telephone service, while Teletype and television (broadcasting) services were also added.

By 1963 telephone wire had been laid from Beijing to the capitals of all provinces, autonomous regions, and large cities, while in turn, provincial capitals and autonomous regions were connected to the administrative seats of the counties, smaller municipalities and larger market towns.

In the years immediately following 1949, telecommunications - by telegraph or telephone - mainly used wire; by the 1970s, however, radio telecommunications equipment were increasingly used and began to replace wire lines. Microwave and satellite transmissions were soon introduced and have now become common. (China launched its first television-broadcast satellite in 1986.) In 1956 the first automatic speed Teletype was installed on the Beijing-Lhasa line. By 1964 such machines had been installed in most of China's major cities. Radio-television service also was installed in major cities, and radio teleprinters became widely used.

An important component of the Fourth Five-Year Plan (1971-75) was a major development program for the telecommunications system. The program allotted top priority to scarce electronics and construction resources and dramatically improved all aspects of China's telecommunications capabilities.

Microwave radio relay lines and buried cable lines were constructed to create a network of wideband carrier trunk lines, which covered the entire country. China was linked to the international telecommunications network by the installation of communications satellite ground stations and the construction of coaxial cables linking Guangdong Province with Hong Kong and Macau. Provincial-level units and municipalities rapidly expanded local telephone and wire broadcasting networks. Expansion and modernization of the telecommunications system continued throughout the late-1970s and early 1980s, giving particular emphasis to the production of radio and television sets and expanded broadcasting capabilities.

Marked improvements occurred by the mid-1980s with an influx of foreign technology and increased domestic production capabilities. International and long-distance telephone links by cable and satellite of high quality multiplied. Telegraph, facsimile, and telex were all in use. International satellite ground stations in Beijing and Shanghai were built and a domestic satellite communication network was operational in 1986. Over 160 radio stations existed by the mid-1980s, and transistorized radio receivers were common. A vast wired broadcasting system included over 2,600 stations carrying radio transmissions into all rural units and many urban areas. The television system grew rapidly in 1980s, with 90 television stations and 80 million sets by 1987.

By 1987 China possessed a diversified telecommunications system that linked all parts of the country by telephone, telegraph, radio, and television. None of the telecommunications forms were as prevalent or as advanced as those in modern Western countries, but the system included some of the most sophisticated technology in the world and constituted a foundation for further development of a modern network.

Overall, China's telecommunications services improved enormously during the 1980s, and, the pace of telecommunications growth and technology upgrading increased even more rapidly after 1990, especially as fiber-optics systems and digital technology were installed. After 1997, China's telecommunications services were enhanced further with the acquisition of Hong Kong's highly advanced systems. In the late 1990s and early 2000s, foreign investment in the country's telecommunications sector further encouraged growth. Notable has been the tremendous increase in Internet and cellular phone usage. China became the world leader in the early 21st century, in terms of number of cell phone subscribers. The nation ranks first in the world in numbers of both mobile and fixed-line telephones, and second in the number of internet users (after the United States).

Despite these advances, China's telecommunications infrastructure has not been able to keep up with demand and has not spread to the relatively poorer regions. A large proportion of the country's population still has little or no access even to basic telephone and Internet service. Although the number of cellular phones has grown enormously, surpassing that for standard (i.e., landline) telephones in 2003, the overall ratio of phones per capita has nonetheless remained much smaller than it is for the developed countries. See also: Digital divide in China and Poverty in China

China is the largest user of largest Voice calling over the Internet or Voice over Internet Protocol (VoIP) services with 51 million Tom-Skype users as of November 2007.